Below you will find a list of our most frequently asked questions about CBCSI, membership and donations.

Should you have any further queries, please don’t hesitate to contact us.

How do I get a member signboard for my home? 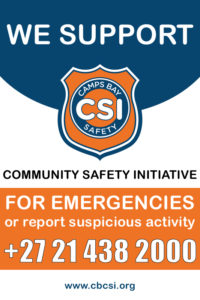 A member signboard is available for purchase by anyone who donates on a regular monthly or annual basis. Please email your name, address and contact number to [email protected] to order your board, or get in touch via the contact page.

Boards are ordered by request and once received we will install it with you. The board is attached using adhesive so there is no drilling of holes required to attached the board to your wall.

A portion of the cost of the board is put towards our Community Upliftment Projects.

Who manages the operational side of CBCSI?

As of April 2020, CBCSI moved it’s infrastructure and operations to Community Crime Prevention‘s (CCP) management. This has allowed us to create a single integrated, state-of-the-art provider from Clifton all the way to Hout Bay, although each community remains separate financially and is self-sustaining. CCP operate and manage our control room (WatchCon) and provide us with strategic, operational and crime fighting services under a single team.

I contribute to my street security scheme, am I a member of CBCSI?

You are only a member of CBCSI if you contribute R350 per month (R4200 annually) directly to the Trust. Some areas have additional security schemes, such as guards who patrol, but these are funded separately from CBCSI. They do, however, rely on the structure of CBCSI’s cameras, Control Room and TAC1 Vehicle in order to respond to incidents. We strongly encourage you to donate to CBCSI so that we can continue to provide this important service.

What is Camps Bay Watch?

Camps Bay Watch (CBW) is a neighbourhood watch program, where ordinary residents, after receiving basic training, patrol the suburb after dark to provide “feet on the ground” and “eyes and ears”. The purpose is to report any matter of concern, whether of major or minor importance, and to act as a general deterrent. On occasion citizen groups are brought together for one-off operations, such as sweeps of areas where there is a perceived high risk.

Camps Bay watch doesn’t have financial resources or infrastructure. It is a pure volunteer organization. What is important to note is that the radio network used by CBW is manned by CBCSI’s WatchCon and reports of any kind are acted on by CBCSI. Camps Bay Watch, on it’s own, doesn’t have the “sharp-end” capability to act with any force or respond to emergencies.

The Trust is audited by Nolands Inc. Financial statements of the Trust are available on request from Mark Myerson (Trustee) at [email protected]. Decisions of the Trust are made through regular trustee meetings and close workings with our Operational Command and other stakeholders.

Cameras, radios, equipment, IT infrastructure and WachCon add up to a hefty capital investment. It is important to note that this capital, running into the millions, comes from the donations of a few individuals in our community, who don’t want any public recognition. Without their generosity, CBCSI wouldn’t exist.

Because the time spent by the Trustees is provided without remuneration, what is left for the community to cover is the monthly operating budget to run CBCSI and provide the operational services. This budget is approximately R150,000 per month, funded from the recurring donations of about 650 members. Currently, the minimum donation is R350 per month or R4,200 per annum, although some members of the community donate much more, in some cases running into hundreds of thousands per annum.

Prior to 2016, the CBCSI donations were paid to the armed response companies (either Bay Response or ADT) on behalf of CBCSI. This hasn’t been an ideal situation for a number of reasons, so from April 2016, we converted these payments so that they are made directly to the Trust, which allows better control and more reliable member information, in addition to a VAT saving on each contribution. Payments directly to the Trust do not attract VAT, allowing the full amount to be used for security services. We encourage all members to convert their payments directly to the Trust.

It is worth re-emphasizing that the monthly budget for CBCSI takes no account of the hundreds of hours of unpaid input of the Trustees, and a number of other volunteers, including Camps Bay Watch Sector Heads and patrollers. Given the worsening security situation in South Africa and the imperative to maintain the hard won reputation of Camps Bay as a low crime area, the monthly spend for the services provided by CBCSI should be much higher, bearing in mind that members haven’t contributed any capital and continue to benefit freely from the time of the Trustees and other volunteers.

It should also be noted that CBCSI is stretched financially. We run things as tightly as possible. Every rand is used wisely. Financially, we are a very efficient non-profit organization. But we could provide even better security, improve our technology and member services, and secure our sustainability if more people contributed. Considering the value of homes in our privileged community, R350 is really a very small price to pay.

The 650 members of CBCSI comprise less than 22% of the estimated households in Camps Bay, Clifton and Bakoven. If this number was raised to 60%, we would be able to expand our program and effectively rid Camps Bay of the niggling crime that still exists and which is sometimes still serious. In reality, perhaps taking aside our general political environment, crime is the only real barrier to Camps Bay becoming one of the most desirable places in the world to live and to holiday.

What would CBCSI do with more paying members?

There are many important things CBCSI still needs to do. Some of these include:

Are donations tax deductible and receive a S18A Certificate?

CBCSI operates through The Camps Bay and Clifton Safe Community Trust (Reg No: IT2937/2010). The Trust is a non-profit PBO (a Public Benefit Organization), which means that all its income is applied towards the objectives of securing the Community. The Trust is governed by a trust deed that covers things like how decisions are made. The income comes entirely from voluntary donations, which are tax deductible under S18(a) of the Income Tax Act.

In March of each year we automatically generate a Section 18A Certificate for all members for their total donations over the past financial year.

If you have donated but not received your certificate, please contact Sarah on [email protected]

How do I benefit directly from CBCSI?

Some of the benefits of CBCSI accrue to the whole community, even those who don’t pay. You may therefore ask, “Why should I bother to pay”? We hope we’ve made a good case for the essential value of CBCSI, the moral imperative to contribute, the principle of fairness and the support of your community, but here are some of the direct benefits:

No, we do not provide those services. Armed Response companies, such as Fidelity ADT and Bay Response, provide these services.

Do I need armed response and CBCSI?

CBCSI is complementary to armed response. Both are essential for a safe community. Without either, a community in South Africa, particularly an affluent one, quickly becomes unsafe. We support and work closely with ADT and Bay Response.

Having a community security presence and having armed response linked to an alarm signal is best practice in residential security. Some communities, like many in Johannesburg’s northern suburbs, have an integrated service such as CAP (ie community and armed response combined), and some communities, like ours, provide these services through separate entities. The important point is that both are necessary!

Please therefore support CBCSI. We are your community safety.

CBCSI members are those who support us financially through a donation of R350 per month or R4200 annually. In order to sign up please visit our Donate Page and then email us your contact details so that we can track your donations and provide you with an annual S18A Certificate. We will then add you to our mailing list and invite you to join our Members Only telegram channel.